dreaming of life off the grid 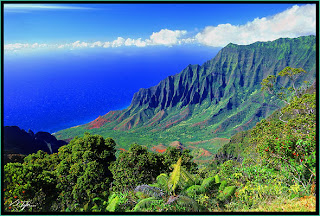 It was triggered by a casual remark. Part of a script that the pilot reads four times a day. Just tossed off as one phrase about half way through an hour long monologue delivered through a headset mike to a helicopter full of pasty tourists from the mainland. But it triggered something organic, visceral within me. I was surprised at the effect. But it was there. Undeniable. And I am still grappling with it.

OK – so in the spirit of full disclosure, I’ll be 58 this summer – yikes…scary. At 22 I had hair down to the middle of my back, straight, parted in the middle. And small round glasses like my idol John Lennon. And I did actually go to Woodstock. It was wonderful. Everything you can imagine…times 10. But I digress.

After we had flown over Mt. Wai’ale’ale, and then down along the Na Pali coast, he tilted the chopper and started flying west up the Kalalau Valley. Rather unemphatically he stated “…and there are about 40 hippies living off the grid down there in paradise. They’ve been out there since the 70’s.”

And something in me clicked. Wow, man - that sounds cool. I could make that work. The scenery was breathtaking - painfully exquisite – lush verdant angular cliffs rising 3,000 feet from the turquoise sea, straight up. Being a child of the 60’s came back to me; a flower power teenager and then a full fledged hippie in college, foot loose and fancy free, being only in the moment. Practicing yoga and reading Ram Dass and being a vegetarian. Wearing basically the same clothes for weeks on end. Devouring music. Savoring every nanosecond - not wasting any synaptic cycles worrying about the future. Calendar-ectomy.

I had a visceral reaction to this guy’s comment. It brought back a flood of memories. And made me long for that sensation, the spontaneity, the joy.

After he set us gently back down on terra firma, I couldn’t get the image out of my mind’s eye - those people living out there, in that beautiful valley, a short walk down to an unspoiled primordial beach. No phones, no computers, no dealines, no video games, no TV. They had no idea who Brittany Spears was. Herding wild goats and growing their own taro.

I asked almost every local I met after that about Kalalau – had they been out there? What had they seen? You can only get there by walking or by boat. It is a grueling two day hike – about 11 miles – on a narrow and rocky path along the coastline. In the summer, the sea on the north side of the island is said to be like glass and you can kayak to the beach. Many people I spoke to had made the trip. And they shared some great stories with me.

One young woman had been out there four times and said it was amazing. There is a lending library which consists of a circle of hammocks under the trees with books on tables all around the perimeter. You take one and lie down under the shade of the koa trees. Another person described the locals as being very low key and friendly and welcoming to visitors. The dress code is quite relaxed – one visitor described having a woman step out of the underbrush wearing nothing but a beaded necklace and hiking boots. There is a defacto *mayor* who keeps an eye on things and comes into town periodically to connect with the real world. People are having babies and raising families out there, too. They do everything that we do living here on the grid – except get stressed and compete and pose.

The rangers go there every Tuesday by either chopper or semi-inflatable boat to check on permits and clean out garbage – it is a state campground officially. And they try to chase the hippies out, but only half heartedly it seems.

Kalalua Valley is rumored to be where the ancient Hawaiians lived – because it is so beautiful and so remote. The next valley along the coast is where they buried their kings and queens, in caves in the cliff faces – out of reach of predators and marauders.

Maybe someday I’ll go back and make the hike in to see what these folks are up to. To see how they live, away from the race de’ rat - with the winning and losing rodents. Where that first stretch in the morning greets the sun, as it floats up over the Pacific. Pull a sourapple from a tree, peel and eat it for breakfast. Then wander down to the beach, wade into the warm blue waves for a soothing swim. Go get a book from the library. Return the one from last night. And be in the moment.

Oh…sounds sweet. If at some point you wonder where I have gone, think of Kalalau.
Posted by Unknown at 10:10 AM

I love that the same guy who longs for a lending library, disconnected from the grid, gets huge kicks from Second Life and the 3-D internet. Humans are so complicated. I love that.