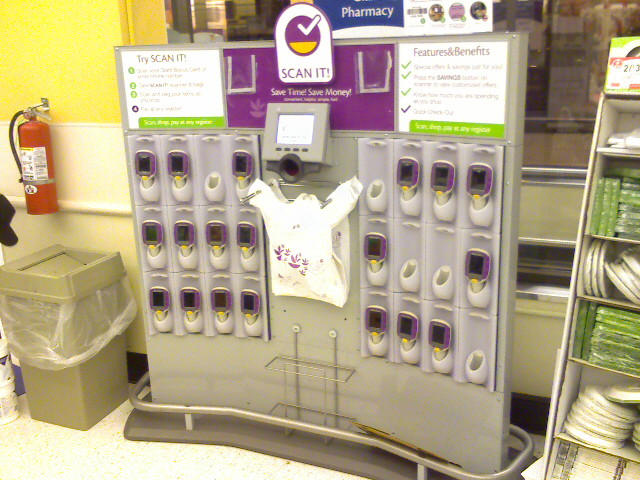 Amazing how the interaction of carbon based life forms has changed in the past few years. Used to be once upon a time that you needed to have face to face interaction in order to purchase things. Someone had to ring up your items, and take your money and give you your change and put your purchase in a bag(s). But that era has ended as I discovered last weekend.


I went to my local super grocery store late on a Saturday afternoon and initiated my spree by scanning the key tag with my store assigned ID number. It then assigned me what could only be described as a *wand*. This is what I used to scan each item before I put it in my cart. It would also make the occasional *ringing cash register* sound if I passed by an item on a shelf that was on sale or had a 2 for 1 type of promo running. The sound was somewhat disconcerting at first, but I got used to it. So, I ticked items off my list, grabbing whatever senior management had requested (read: the wife) and then checked out. By once again placing the *wand* in front of a scanning device in an automated check out aisle, it downloaded the data about the items and their costs and then asked me to pay. I used my debit card, took the receipt after the computerized female voice said *don't forget to take your receipt". I then bagged the groceries myself and strolled out of the store.


And then it hit me. Not once during the course of that entire experience had I interacted with another human. It was weird. As if I had not really been in the store. No one had said hello. Or even asked if I wanted paper or plastic.
Time marches on I guess. Maybe next time I'll opt for the real person at the cash register so we two breathing creatures can have some semblance of interaction.
Posted by Unknown at 1:54 PM