My Secret Sauce to Cook Up Multiple Careers


Last Tuesday I participated in a very innovative networking event in Second Life hosted by the principles of ThinkBalm, Erica and Sam Driver. (I have since created a machinima that you can view here.)

I have been working on a presentation that ties metacognition and reinvention and the new workplace models to my six careers. I feel like poster child for how today's learners will function in the workplace in the 21st century. The critical importance of learning how to learn, and thinking about thinking. And the fact that 85% of the jobs that today's learners will be doing have not been invented yet.

After seeing an amazing demo by the team from HealthyWorlds last spring, complete with a huge T-Rex on stage and oversize fruit falling from the ceiling, I was struck by the tremendous and as yet largely untapped potential of immersive environments to be much more cinematic, much more involving.

Rather than just put up PowerPoint slides and speak to them, or even stream video into these spaces, why not do something totally new...something you simply can not do in any other type of forum.

Together, we worked up a storyboard based on my earlier Bennington presentation, distilled it to five minutes, and created several moving visual elements to make it *come alive* for want of a less clichéd qualifier. And it was quite impactful.

The six careers I have had since I graduated from college 35 years ago were laid out on a giant GANTT chart. I briefly described each one and images from that phase of my life popped up. I also talked about the compelling event that inspired me to move from one to the next.

I then introduced my *secret sauce* - the three key focus areas that helped me to move through these careers. They are: antenna, brand and network. Simply put, I trusted my instincts and followed my bliss, was always very aware of my own personal brand - what makes me unique - and focused on the ongoing and constant nurturing of an ever-evolving web of contacts.

Words representing the various factors that influenced my shifts - lifestyle, technology, social, political - floated into an antenna that appeared above my head.

Then the four elements that make up my brand appeared - Musician, Philosopher, Techie and Communicator - each with a unique font and color and style - two above and two next to me. After a few moments, allowing me time to speak to each, they merged into my name - *Christopher!*

Finally, a 3D image of the many social networking tools that I use appeared behind me, followed by a matrix of faces representing my broader network. Both images drifted away from the stage one after the other, out into the audience and then dissolved.

I ended with images from my Moo card which has my avatar portrait and my contact information.

It was great fun! I look forward to doing it again. The plan is to shoot a high quality machinima of this piece and then post it. I also want to flesh out the whole scenario into a longer, much more detailed and really immersive experience. I'll keep you posted. 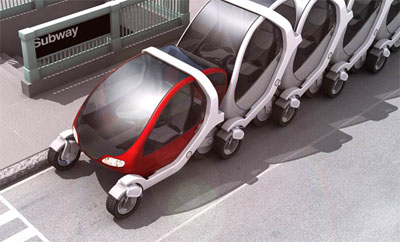 According to their overview: “At the MIT Media Lab, the future is lived not imagined.” And what a future it is.

I had the privilege in late April of attending an all day seminar at the MIT Media Lab focused on smart sustainable cities. Twice a year, the Lab produces a Sponsor Day where companies and organizations that help to underwrite their activities are invited to a focused session presented by professors and students. Since IBM is a sponsor, I got to attend, along with colleagues from IBM Research, the Global Innovation Outlook team and CHQ strategy.

Multiple teams shared their perspectives on various attributes of the city of the future, with most aspects of urban life extrapolated out many years.

The main speaker was Bill Mitchell who leads a research group focused on *smart cities*. He and his colleagues talked about topics ranging from urban nervous systems, smart distributed energy systems, health networks, learning networks and personal mobility. Let me share some of the topics and my impressions.

Living Networks: Jarmo Suominen asked that we think of buildings not as skeleton and skin as they were in the 18th century, but rather as intelligent nodes that connect and behave like an intelligent system. Keep in mind that over the next 15 years there will be 350 million Chinese moving from the country to the cities. That is more than the current population of the US. Homes are again centers of work, entertainment and healthcare. Work is becoming distributed and mobile. The economy is weightless. Envisioning a future where architecture participates in the media experience. Architecture as a scrim – people are able to project cell phone images onto the LG HQ building in Seoul.

Smart Distributed Energy Systems: I loved the description of renewable energy sources like solar and wind as – at the end of the day – really just weather! So you need to manage them accordingly and design for variables including daily, seasonal and inter-annual changes. Much of the challenge around energy use is in how we think of it. Our culture has a bit of a feeling of entitlement – like we can use however much energy we want whenever we want. But that conservation is one of the key next steps toward smarter energy. Distributed systems for energy built around what is available. Using ZigBee to connect the nodes. Buildings that both produce and consume energy, much like the Internet. A two way interaction not one way – bi-directional.

Urban Nervous Systems: Turning the security paradigm on its side by shifting from privacy to accountability. Citing Kim Cameron’s The Laws of Identity.

Health Care: John Halamka talked about digitized health care estimating it would take $34B to do this. He had his entire genome sequenced in order to identify where there were weaknesses. He has a proclivity for glaucoma so he can now do wellness care to try to prevent the onset of some of these conditions. Or be aware of genetic tendency in his daughter.

Learning Networks – Mitchel Resnick stated that who is allowed to be in the learning network determines what is learned. Quest to Learn is a NYC school for digital kids, bridging the traditional and 21st century literacies. Described as *hard fun*. Again – the importance of human behavior. His perspective is that policy factors are one of the key delineators or roadblocks to incorporation broader vies of learning using technology. (I think this applies to business settings as well.)

Personal Networks – discussion ranged from electric bicycles (Green Wheel) to electric scooters, tiny citycars and personal biomechatronics – load bearing exoskeletons for augmentation of human running and carrying. Even a *personal aircraft* was discussed - Terrafugia - designed by MIT-trained aeronautical engineers! The bicycle is described as the culmination/evolution of a 100 year old technology which works best in flat areas, but does not do well with complex topology. Mobility on demand requires intermodal interchange. For example, if you are going shopping for groceries, you could in theory take an electric scooter to get there, but to return home with your bags you would need a different mode, perhaps a city car. One of my favorite demos was an animation of the citycar showing a prototype of a tiny micro-auto that has no engine but electric motors in the wheels. It can turn 360 degrees and fold up on itself in order to take up less space at the curb when parked.

All in all a very fascinating day. I will describe some of the other demos we saw in another posting.
Posted by Unknown at 6:56 PM No comments: